The Toccoa River Canoe Trail is a 13.8 mile route that goes from Deep Hole Recreation Area to Sandy Bottom Recreation Area in Blue Ridge, Georgia. This is a trip I’ve wanted to do since I first heard about it. I love this area of north Georgia, and I had a feeling this trip would be one of the best ways to experience it.

We kayaked the route on the last weekend of July. We modified the route slightly, and took out at a different spot, simply because Sandy Bottom was insanely busy with all the tubing company buses picking up tourists and their tubes. We took out at an unmarked dirt parking area on Dial Rd in the Aska area of Blue Ridge. If you google Toccoa River Canoe Launch, it will show you where to go. Basically you drive down the road until you find a good spot. There are several spots on the road with parking and river access. We picked the one that had room for our truck.

What made this trip possible for us was having two trucks. We left one truck at the take-out point, and took the other truck to the put in spot at Deep Hole. It’s only a 10 minute drive between the two points, but a 3-4 hour kayak ride. If you don’t have two trucks, you can leave from Toccoa Valley Campground and for $10 they will pick you up in a shuttle from a private take out point on land that they own about 6 miles upriver. I have camped and tubed with them, and they are the nicest, most helpful people.

It took us about 4 hours to do the trip in kayaks, and that included stopping for snacks and a little exploration. The TRCT takes you past private vacation homes, rolling hills and pastureland, as well as through a remote area of the Chattahoochee National Forest. You pass under the Swinging Bridge, a popular tourist spot and a beautiful section of river.

The route has no markers or signage, but there is plenty of information on the internet. The take out point is at Sandy Bottom, and there is a concrete boat ramp to pull up onto. It’s very important that you get out here, because just past here there are Class III and IV rapids. Pay attention so you don’t end up in over your head, quite literally!

The Toccoa has loads of small, Class I rapids that are fun to go over in a kayak or tube. The river moves along at a nice pace. You don’t have to paddle much other than to steer around the rocks and through the rapids. Just past the Swinging Bridge, there is a couple sets of Class II or III rapids that we tried in our kayaks. I got turned around backward, got dumped, but managed to haul myself back on and make it through the second set. This was the first time I’ve ever felt that my cheap Wal-Mart kayak was not up to the job. I could just tell it wasn’t handling the way you would need it to in order to do anything above a Class II. It’s a sit in, recreational kayak, not a whitewater kayak. Still, if you want a fun ride, hit the rapids at the Bridge. It was a blast! 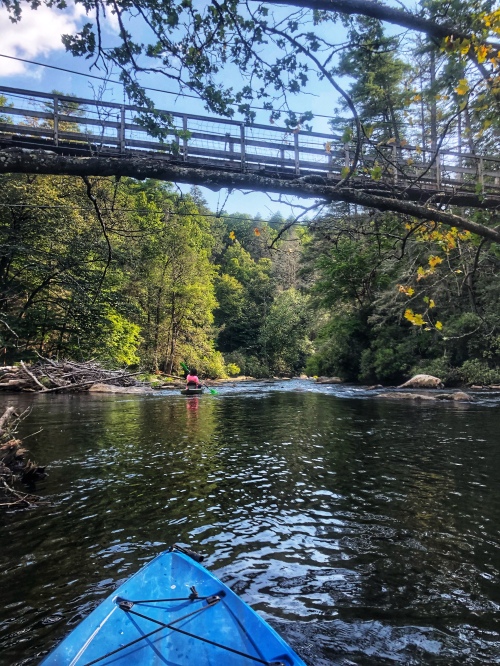 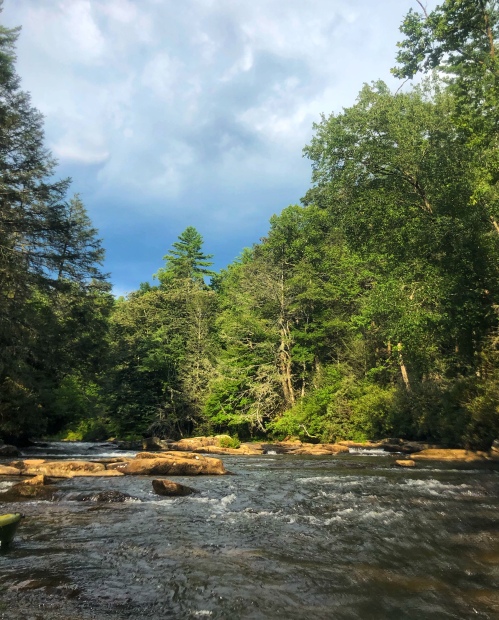 We didn’t bring anything with us in our kayaks except water and snacks. You could pack your kayak with camping gear and camp overnight at free campsites near the Swinging Bridge in the National Forest. We decided to keep it simple and car camp. Toccoa Valley Campground was full, so we went to Skeenah Creek Campground, just around the corner.

Skeenah Creek Campground was perfect! They offer tent and RV camping and they have nice, flat, grassy campsites right next to the creek, as well as a bath house with showers. You set up your tent on the soft grass instead of a horrid gravel pad like they have at all the state parks. There is an old mill on the property with a waterfall that you can hear throughout the campground. They also have a covered pavilion, which was a lifesaver for us since it rained that night. We were able to make dinner on the tables under the pavilion and sit in rocking chairs and hang out while the rain fell. Otherwise, we would have been sitting in separate backpacking tents, not really able to hang out.

We had such a good time on this trip that we’re trying to do it again before the temps start to drop in the fall. The river is absolutely stunning. Paddling peacefully down the river with dense forest on each side, a hawk flying overhead, and a trout leaping out of the water beside you- it doesn’t get any better than that. The Blue Ridge area of north Georgia is my favorite. Every time I go up there, it’s hard to get in the car and head back toward the suburban sprawl that is metro Atlanta. If you live anywhere close, this is a trip that I would highly recommend.